Thanks to Caroline Mueller for this post! She is such a great patriot!

“To love another person is to see the face of God.”

— Victor Hugo, Les Misérables (1862)
Ayn Rand’s (Atlas Shrugged) favorite author Victor Hugo championed liberty and individualism to such a degree that the Cato Institute’s Jim Powell hailed him as a “leading light for liberty during the nineteenth century”.  Powell says:

Hugo’s most beloved work, Les Misérables, nails government as a chronic oppressor.  He shows poor people being helped not by government but by the charitable works of a private individual.  He tells why a resourceful entrepreneur is an engine of human progress.  He celebrates revolution against tyranny, while making clear why egalitarian policies backfire.  His hero Jean Valjean does good voluntarily, peacefully.

Although Hugo possessed a good and generous spirit (personal charity accounted for about a third of his household expenses during his peak earning years), a deep compassion for the suffering of individuals and mankind in general, and an abiding trust in God’s love — because of his legendary vanity and extramarital affairs, he was hardly considered a Christian role model or a pillar of righteousness in his personal life.  Indeed, at times, he stood on the boundaries of the Christian faith.

However, in spite of Hugo’s blemished religious and moral character, Les Misérables is a profoundly “Christian” work.  The website www.ukapologetics.net goes even further to say:

Possibly without even realising it, in Les Misérables Hugo has written one of the strongest pro-Christian novels of the last two hundred years. 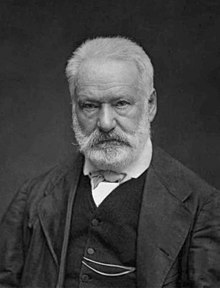 Victor Hugo was a complex man who’s views on politics and religion evolved over time.  As a youth, he was a committed royalist who admired Napoleon and supported the French Monarchy. However, over the next few decades, Hugo became increasingly critical of the liberty-crushing Bourbon Monarchy and became a passionate supporter of republicanism.  He also became disillusioned with the Catholic Church (the state church of France), which legitimized and supported the authority of the French monarchy, while turning a blind eye to the plight of the poor.  Hugo believed the church should not align itself with the state, but instead with the people.
When Louis-Napoleon (Napoleon III) seized complete power in 1851 establishing an anti-parliamentary constitution, Hugo openly declared him a traitor to France.  Hugo’s liberty-minded political views forced him to leave France in 1851 for an exile that would last 19 years.  In 1859, Hugo told a group of a thousand people gathered on the British Isle of Jersey:

Liberty is the most precious possession of all mankind.  Food and water are nothing; clothing and shelter are luxuries.  He who is free stands with his head high, even if hungry, naked and homeless.  I dedicate my own life, whatever may be left of it, to the cause of liberty — liberty for all!

It was during his exile that Hugo wrote his 1400-page epic masterpiece Les Misérables (English translation:  “the miserable ones”, “the wretched” or “the poor ones”).  It had been a project long simmering in his mind since 1840.
And, oh, what a story it is!  On its publication in 1862, it generated such excitement that crowds collected and fights broke out as people vied for the 48,000 original copies.  Poor people pooled their money to buy a copy to share.  Since that day, it has been translated many times over and reproduced in many forms including a broadway musical as well as several film adaptations, the latest — a movie based on the musical — to star Hugh Jackman, Russell Crowe, and Anne Hathaway (coming this Christmas to a theatre near you!).
I hope this movie trailer whets your appetite!!!:

How Trump would CRUCIFY Hillary Clinton in 2024
The Black Sphere